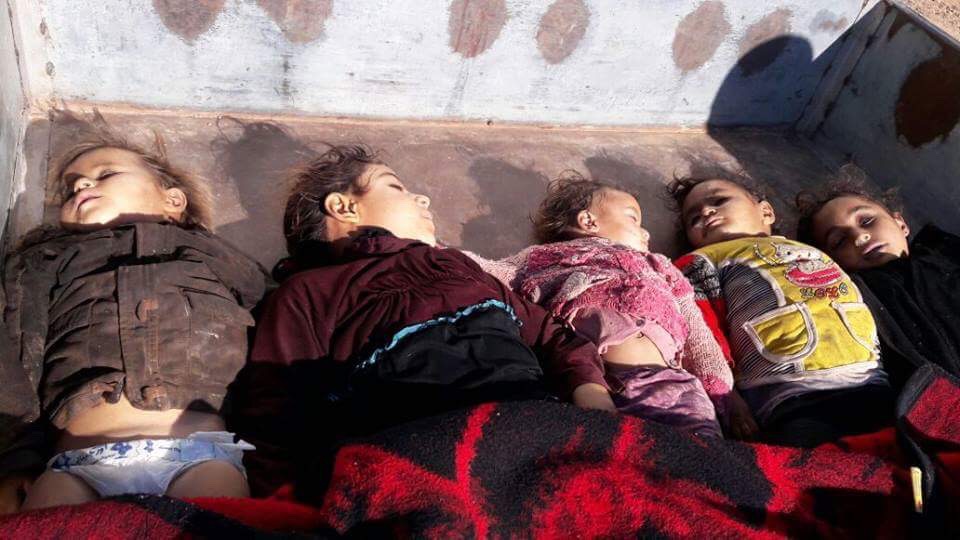 A chemical agent attack was reported today in the eastern suburbs of Hama in the Aqeerbat area. At least 93 civilians have been killed and over 300 wounded. The attacks happened at approximately 6:30 a.m. on December 12 Damascus time amidst heavy airstrikes which lasted over an hour.

Many of the victims were children. Victims exposed to the odorless, colorless gas experienced symptoms including: dilated pupils, convulsions, extreme dry cough, bloody secretions, suffocation, nausea and vomiting. The victims that were killed died very quickly, had foaming of the mouth and no signs of physical injury. Casualty numbers are high due to shortages of medical staff with chemical weapons response training.

UOSSM is disgusted by the vulgarity of these attacks against children and civilians. We ask the OPCW (Organization for the Prohibition Of Chemical Weapons) to fulfill it’s mandate and launch an immediate investigation into this attack and hold perpetrators responsible for war crimes (UNSC-R 2118, UNSC-R 2209).

100,000 civilians in eastern Aleppo are confided to a very small area, under constant and relentless bombardment, with no access to medical or humanitarian aid. Many of those civilians are women and children. Hundreds require immediate medical attention and need to be evacuated. Given the severe targeting of aid /healthcare workers, we plead with the UN and WHO to use every power at their disposal to evacuate aid workers, NGO staff and their families from Aleppo. The genocidal killings in Syria must stop now.

"We cannot stand one more day of horrors. Every day a new sadistic action is taken against the people of Syria as the world looks on dumbly. Try and imagine the pain and suffering the people go through for every moment without peace."  Said Dr. Anas Al Kassem, Chairman of UOSSM Canada /Ontario Surgeon   .